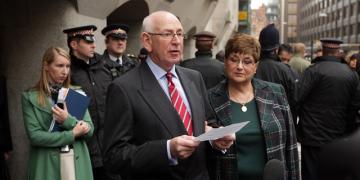 ‘She had over 40 stabs to her body. It was a scene out of a horror movie.’
Ted Hynds, Journalist

Rachel Jane Nickell is born to Andrew, an army officer, and Monica on 23 November 1968. They bring her up in the Essex village of Great Totham, near Colchester. Rachel’s naturally charitable and she helps out with both the old folk and disabled children in the area. Aged 11 she goes to Colchester High School for Girls and in her spare time she tries her hand at acting, singing and dancing at the Essex Dance Theatre. Her teachers think she’s a natural but rather than immediately pursue the arts, she continues her academic studies with an English and History degree.

Rachel supports herself by working as a lifeguard in a pool in Richmond, London. In 1988, while working there, she meets Andre Hanscombe, a motorbike courier and a year later, they have a son, Alex. They move in together in Balham, South London.

The murder of Rachel Nickell

She puts Alex before her degree and isn’t interested when she’s offered modelling work. Instead, she hopes to make it as a children’s television presenter. She’s a natural on camera as seen in one home video, taken on a cold, misty day, where she runs towards the lens laughing.

15 JULY 1992
It’s a warm Wednesday morning in July as Rachel, now 23, readies her son for a walk on Wimbledon Common. Within two hours, she will be dead, murdered in a popular beauty spot.

Across London, on the tough Alton estate in Roehampton, 31 year old Colin Stagg wakes early and prepares his dog for a walk. Colin’s lived on the estate since childhood but now unemployed, his daily concerns rotate around making sure his pet is fed, and he’s got enough money for cigarettes. But this morning he’s got a really bad headache. His usual long walk is shortened to going round the Scio Pond (the nearest pond to his home) and back. At 9:25am, with his headache still hurting, he takes painkillers and tries to sleep it off on the sofa.

As Colin rests, Rachel and Alex walk their pet Labrador Molly along a much used path. They’re enjoying the gentle breeze and the early summer sun and are just 200 yards from many other mothers also walking their children. But Rachel and Alex are being stalked. The time is around 10:20am.

They’re laughing as they stroll along. Alex will be three in a month’s time and it’s possible he’s thinking about his upcoming birthday.

Craig Freer, was getting ready for work one morning when armed men in balaclavas burst into his home.

Analyseing one of the most shocking crimes committed against Police Officers in recent history in the UK.

Suddenly, a man appears. Alex sees a white male, tall and slim with brown hair, then the flash of a blade. He’s ripped from his mother’s arms and knocked to the ground. Then, the stabbing and the sexual assault start. The attack’s so ferocious that one of the blows that cuts her throat almost decapitates her. One of the 49 stab wounds ends the life of Rachel Nickell.
With the frenzied attack over, the man flees.

Alex picks up the bank notes that have scattered from her mother’s pocket and tries to give them back to her. He places one on her blood stained face, almost like a plaster. But he knows she’s never coming back.
A woman comes across the blood soaked boy next to his mother’s body under a silver birch tree. The police flood the area trying to contain a crime scene of over 1000 acres of woodland and with potentially 500 witnesses.
Colin Stagg is unaware of any of this, and with his headache calming down and the day warming up, he changes his clothes and decides to take his dog for a longer walk. This decision will affect the rest of his life.
He walks through the underpass of Putney Vale cemetery and then meets a uniformed officer who says he can’t go onto the Common because they’ve found a body. Colin volunteers the fact that he’s been on the Common already that morning and helpfully gives his name and address. Unable, yet again, to do his intended walk, Colin returns home.

The story dominates the next day’s headlines.

BEAUTY SLAIN BY THE BEAST

Very Idam Henyansyah, known to Indonesians as Ryan, sentenced to death for a gruesome murder of one man, is a self-confessed...