The Murder of April Jones 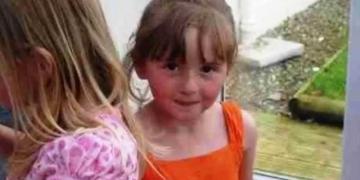 Tourists come to the small Welsh community of Machynlleth attracted by both the historic market town and the scenic surroundings of the Cambrian Mountains.

Paul and Coral Jones live on a small housing estate in Machynlleth with their three children Jazmin, Harley and five year old April.

April was born seven weeks premature and complications during her first weeks left her with cerebral palsy down her left hand side - from her hip to her leg.

“She had a lot of pain with her leg...she was very determined to get up and do something even when her leg wouldn’t let her. So one of the things we did from the beginning was actually teach her to ride a bike at the age of three and a half which gave her mobility to get around...She loved that bike and she went everywhere on it.”

April is a petite, sometimes shy, five year old but she is beautiful, has a cheeky smile and a huge hunger for life.

And when the pain in her leg becomes too much and she sits crying on the stairs, her mum, dad, brother or sister are always there to lift her up and comfort her.

How did this national treasure keep hidden his crimes for so long?

The song which was a huge hit for The Boomtown Rats in 1979 was inspired by a 16 year old school girl.

The Monday morning routine of 1 October 2012 is a familiar one.

April shares her room with her 17 year old sister Jazmin. April’s side of the bedroom is painted pink – her favourite colour - and is covered in teddies. She often crawls over to Jazmin’s side to wake her for a cuddle. Her dad Paul then comes in to get her ready and as he’s sorting her, they shout for her ten year old brother Harley to get going.

All the kids then breakfast together.

With the children at school, Coral and Paul go shopping.

Then after school, April has her weekly swimming lesson at the local leisure centre. CCTV captures a happy and playful April exiting the centre, her hair still wet.

April comes home with a school friend and Paul makes them spaghetti on toast.

It’s a rather drizzly, cold October day but that makes no difference to April who wants to go out and, as ever, play on her bike. And as she’s had a good school report that day, she’s allowed to stay outside playing 15 minutes longer than usual.

It is a small community where everyone knows everyone else well enough to know their children are safe to be out on the streets.

Jazmin is at her youth club so her parents send Harley, her brother, to get April in for bed.

“Up to that point it was a very normal day. But our normality ended there.

And we haven’t had a normal day since.”