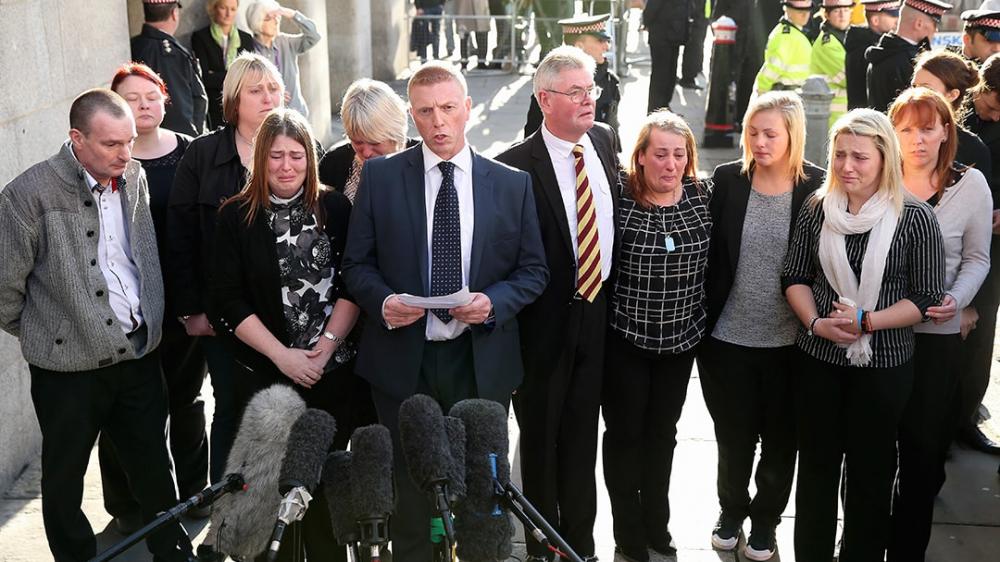 Six months after the killing of Lee Rigby, proceedings began in November 2013 at the Old Bailey in London. Eye witness Tina Nimmo and her daughter dreaded what they, and many others, saw as an unnecessary trial; not least for the pain it would cause the Rigby family: “...That was very hard...to think that we’d both have to go to court and relive our experience with his mum and dad there...we didn’t want to put them through that.  It felt like we were inflicting that pain on them.  But actually, the police told us that they’re already informed of what happened so that sort of takes the burden off you a bit. You’re okay to say how it was.”

The two accused sat quietly. Adebowale was judged fit to stand trial but he had severe mental health episodes. Adebolajo who wanted to be known as Mujaahid Abu Hamza. Mujaahid Abu Hamza had lost two front teeth in a confrontation with prison officers.   He may have lost his chance to be a martyr, but the trial did afford him the opportunity to repeat the message that he and his accomplice were ‘soldiers of Allah’. Their defence was simple. Yes, they killed. But they were soldiers. They killed a soldier. This was war. But this was never a military court-martial. A jury of twelve civilians – eight women and four men – would decide their fate. And outside the court room, there was virtually no support from other Muslims: “This is not representative of Islam in any shape or form, the vast majority of Muslims do not subscribe to the extremist rhetoric and distorted warped understanding of these murderers...the vast majority of Muslims in this society are proud to be Muslim, British, and participating in this particular society.” Dr Abdul Haqq Baker – former chairman of Brixton mosque and founder of STREET UK.

Adebowale’s lawyers offered no evidence in his defence other than to say he agreed with Adebolajo. The court listened to over three weeks of harrowing evidence detailing exactly what had happened on that May afternoon in Woolwich.  On the 19 December the jury returned a unanimous verdict: Guilty. Both the two guilty men remained calm during the verdicts. But when, two months later, it came to the sentencing, their reaction was markedly different. BUTCHERED Mr Justice Sweeney said the pair had ‘butchered’ Lee Rigby. After, he said that instead of being ‘soldiers for Allah’, they had betrayed Islam, both men started shouting and struggling. Security guards carried the convicted men out of the dock. Adebolajo had received a whole life term. He will die in jail. Adebowale got a 45 year minimum sentence. He would be nearly 70 before he would even be considered for release.

The Prime Minister (David Cameron) publicly stated the whole country welcomed the prison terms given. And Tina Nimmo agreed: “They should never be out again, never ever.  I understand people that say ‘people can change.’ ...Whatever...They’ve done what they’ve done, they’ve told us what they’ve done, they’ve put their hands up to it.  Their times up.  That’s the end of that.  He hasn’t got a life and nor should they have.”   The Rigby family also said they welcomed the sentences. And then they showed, very simply, how utterly the killers had failed. “...usually the family of a murder victim are taken away in cars (but the Rigby family) walked out of the Old Bailey. A group of them...just walked down the street...turned right, walked along that street, then turned left down to...the river. It’s almost like, now these two have been convicted and (are) behind bars, we want to show we’re not afraid to walk the streets of our capital...we’re not going to be intimidated by this. You know, we are going to walk our streets in broad daylight and feel safe.” Vikram Dodd - Crime Reporter, The Guardian

Out of the ashes

The Ripper Murdered My Mum 13

The longer you maintain and illusion the harder it is to come back to reality, which is exactly what happened to Kraig

A community in Shock

The Police throw all resources into finding Jeannette.

Did Police really catch the serial rapist in Arkansas?

Coaches that abuse: the biggest abuse scandals in sports history

Winning should not come at the cost of safeguarding an athlete's well-being.

A serial sex killer, a Ripper connection and a famous miscarriage of justice

What drives a child to Kill?

What side of the coin do you fall on?

Missing at sea: the people who faked their own deaths