Mark Chapman: The Assassination of John 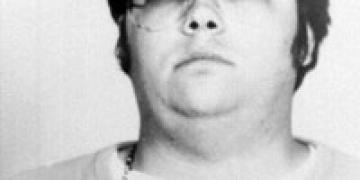 More
The bizarre obsession that led to the murder of the Beatles singer/songwriter.

"The day the music died"

Mark David Chapman was born in Fort Worth, Texas on 10th May 1955, the first child of David and Diane Chapman.
His father David was a staff sergeant in the Air Force, who left the armed services shortly after his birth to pursue an engineering degree, which took the family to Atlanta, Georgia. A sister, Susan, was born in 1962, when Chapman was seven years old.
He was not a popular child growing up and poor at sports. As a result, he developed a rich imagination, to insulate himself against the jibes of his classmates. Chapman claimed that his father was emotionally distant and abused his mother. Consequently he and his sister were terrified of their father. Outwardly, the family were viewed as a happy one, and Chapman appeared a normal, well-adjusted boy, with a passion for The Beatles, and John Lennon in particular. Until his early teens, that is, when Chapman discovered marijuana, graduating to heroin and LSD, and gravitating towards a drug-dominated social set, which fit well with his counter-culture taste in music.

Bonnie and Clyde: Lover and Lamb

Then, just as suddenly, his rebellious phase ended. At 16 he became an evangelical Christian, and his temperament changed just as abruptly. He acquired a born-again Christian girlfriend, Jessica Blankenship, and a job as a counsellor at a YMCA summer camp, where he was very popular with his young charges.
Chapman’s hero-worship of Lennon persisted, until Lennon was quoted in the press as saying “We're more popular than Jesus Christ now,” at which point he renounced his one-time hero. At around the same time, he claims that the reading of Salinger’s novel ‘The Catcher in the Rye’, about a confused teenager, also influenced him deeply.
Chapman continued working within the YMCA, serving on its international programme, briefly in Lebanon and then with Vietnamese refugees back in the United States, at Fort Chaffee, where his popularity with the children he supervised continued unabated. By early 1976, after the refugee resettlement programme had run its course, Chapman joined girlfriend, Jessica Blankenship, at college in Tennessee. His studies suffered, however, when he became obsessed with a single infidelity he had committed with another camp worker, and he grew increasingly paranoid and depressed, and considered suicide.
He returned to his home town, and found work as a security guard, but the depression continued. Chapman resolved to buy himself a trip of a lifetime, to Hawaii, spend his life savings, and then kill himself. He flew to Honolulu, and spent his savings, but failed to carry through the suicide plan, flew home again, fought with his parents, and then flew back to Hawaii again in May 1977. This time he went as far as trying to gas himself in his car but the plastic hose he attached to the exhaust melted and he survived. Chapman checked himself into a mental facility and continued to volunteer at the hospital after his discharge, which resulted in a full-time maintenance position there, where he remained until April 1978. Having again successfully combated his depression for a time, Chapman planned a six-week trip around the world, which he booked through a Japanese American travel agent named Gloria Abe. The relationship between them developed into a romance and they were eventually married on 2nd June 1979. This happiness was short-lived as Chapman began drinking heavily again, lost his job at the hospital and developed a new obsession with expensive contemporary art.
He purchased paintings by Salvador Dali and Norman Rockwell, and amassed debt that his new job, as a security guard, could not hope to support. One obsession led to another and, by March 1980, Chapman became determined to get out of debt, enforcing strict spending limits on himself and Gloria, which resulted in a paying off of the debt by mid-August that year.
By this time Chapman was cycling through new obsessions at an increasing rate, alternately ridding himself of possessions and then replacing them, which placed a severe strain on the marriage. He started to read voraciously, returning again to his favourite fictional character, Holden Caulfield, the protagonist in ‘The Catcher in the Rye’, even considering changing his name to that of his fictional hero. Chapman seemed to alternate between recognising, and rejecting, that he had a mental illness, retreating more fully into the fantasy world that he had conjured up in his youth. According to Chapman, the book ‘John Lennon: One Day at a Time’, by Anthony Fawcett, proved a conclusive catalyst for the events which transpired before the year’s end.

Craig Freer, was getting ready for work one morning when armed men in balaclavas burst into his home.

He was incensed by what he saw as the hypocrisy of his former idol, who preached simplicity, peace and love and yet lived a life of unparalleled luxury in New York. His obsession grew and he decided to go to New York and kill John Lennon. On 23rd October 1980 he resigned from his security guard post, bought a gun (but no bullets) four days later, and flew to New York on 30th October 1980, all financed via a $5000 loan from his father-in-law. He decided to live it up, as he had when he flew to Hawaii on his first suicide mission, and checked in to the exclusive Waldorf Hotel. He spent some time reconnoitring the Dakota Apartments building, the New York home of John Lennon and Yoko Ono, but encountered a major flaw in his assassination plan; the law in New York forbade the purchase of bullets by civilians. He was forced to travel to Atlanta to see a friend, who had become a deputy sheriff, who provided him with the ammunition he required. By 10th November he was back in New York, when Chapman claims that the chance viewing of the film ‘Ordinary People’, in which Timothy Hutton plays a suicidal teenager caught up in the midst of a dysfunctional family, provided a reality check to his obsession. He called his wife, told her that he loved her, that he had defeated his demons, and that he was coming home. This defeat was short-lived however and, after a fortnight of erratic behaviour back in Hawaii, he again left his extremely concerned wife.
Chapman returned to New York on 6th December, where he checked into a local YMCA, and began staking out Lennon’s apartment building, also buying a copy of Lennon’s new album, ‘Double Fantasy’. The next day, he moved from the YMCA to the Sheraton Centre Hotel but was again unsuccessful in his quest to spot Lennon.
The following day, Monday, however, his luck had improved. Not only did Chapman get to shake hands with Lennon’s five-year-old son, Sean, but in the early afternoon, whilst talking to the Dakota’s doorman, John Lennon and Yoko Ono appeared from inside, en route to a studio appointment, and Lennon graciously autographed the dumb-struck Chapman’s copy of ‘Double Fantasy’. Chapman was so overcome by Lennon’s presence, and evident sincerity, that all thoughts of shooting him were temporarily forgotten.
Chapman claims that he spent the rest of that day fighting his demons, praying for help from God to overcome his desire to kill Lennon. The demons won out and, when Ono and Lennon returned to the Dakota at 10.50 pm, on Monday 8th December 1980, Chapman shot Lennon four times in the back, in front of his wife, on the steps to the building’s main entrance. By 11.15 pm Lennon had died of exsanguination, en route to the Roosevelt Hospital. Chapman made no effort to flee and was overpowered by the doorman, with whom he had been chatting earlier in the day.
He was apologetic when the police arrived, claiming to be sorry for putting them to so much trouble. When he had been handcuffed and placed in the police car, Yoko Ono came over to look at him, without saying a word. Within minutes of the news announcements of John Lennon’s death, crowds began to assemble at both the Dakota and Roosevelt Hospital.
Fearing reprisals from enraged fans, police kept Chapman under close guard during psychiatric evaluations and court appearances, and otherwise kept him at the high security jail on Riker’s Island.